Not sure about you, but I'm ready for some May flowers!  Rain & chilly weather got in the way of some workouts during April so I had to opt for some gym workouts.  The month started with a fun run for Autism.  I ran with Cody in this race that started on Beale Street and ran through downtown Memphis by the river.  It was a beautiful Friday night and he had a PR at 38:33 which earned him a 2nd place finish in the under 9 age group! Yay Cody (not bad for a 6 year old!)
I rode several  organized rides this month to build some miles on the bike.  Plus these rides are marked & have SAG's so I don't have to worry about food & drink.
Ride Into Spring is a ride by RB's Cyclery that is normally the first ride of the season for most people.  It was a great day for this ride.  I met David Barczak before the ride & rode the Lucky 13 Tri bike route that gave us a total of 60 miles for the day on the bike.  I have been running a couple miles off the bike since this ride to help condition my legs & mind for the upcoming Tri season.
Los Locos Duathlon was my first multisport race of the season.  It was a hot & windy day but the 'curly girls'  were still able to pull out a 3rd place finish in our age groups!
Memphis Hightailers hosted the Charles Finney Ride which turned out to be freezing cold and with what felt like an arctic wind!  I managed to do 45 miles while several of my friends opted for a hot breakfast at Craker Barrel.
Memphis Thunder Racing sponsored the Cycle for Safety Ride in honor of Cory Horton.  The  out & back ride began at St. George's where Cory coached swimming and ended at his memorial site where the accident happened.  It was a beautiful 50 mile course and a great ride.
During April, I also focused on swim and run speed drills to build some power both in the pool and on the track!
April Totals:
SWIM:  9 miles
BIKE:    299 miles
RUN:     68 miles
Total Distance:  375 miles
Total Training Time: 40 hours 23 minutes

Posted by Books by Rhonda at 9:07 AM No comments: 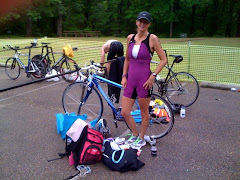